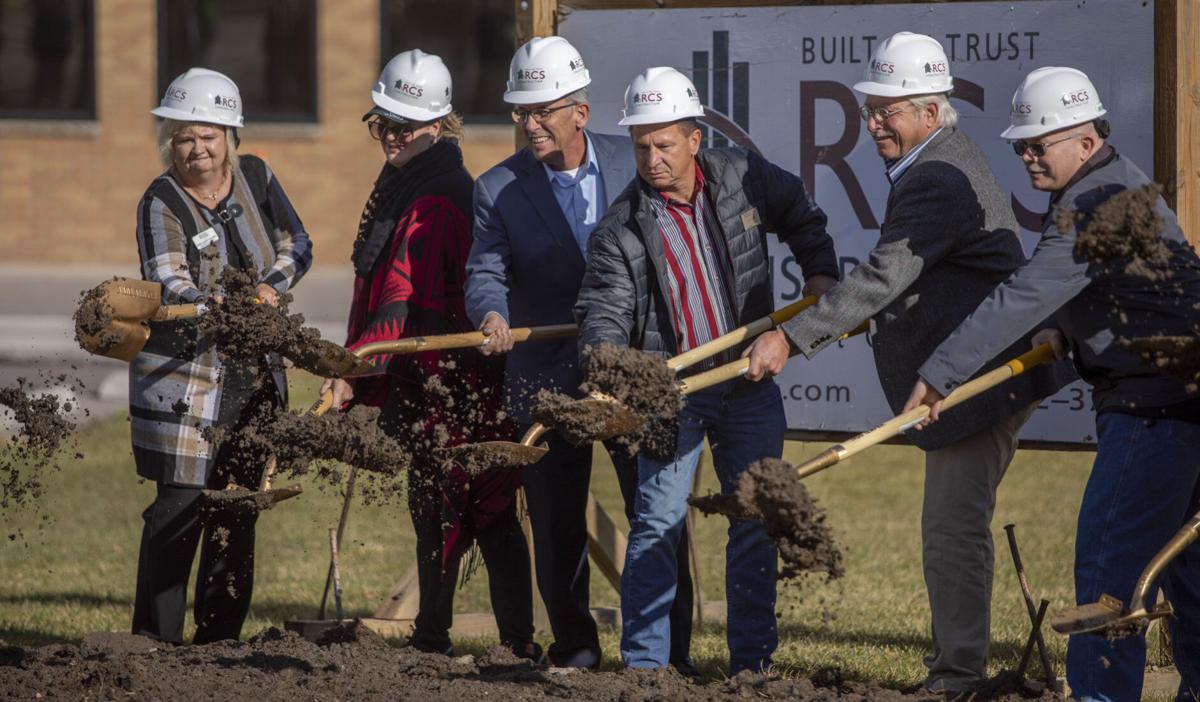 From left: Linda Reidt Kilber, CEO of Behavior Management Systems, members of the Pennington County Board of Commissioners, and Mayor Allender are among those who helped officially break ground for the Crisis Stabilization Unit at the Care Campus on Thursday in Rapid City.

Monument Health CEO Paulette Davidson said the partnerships created between the city, county, state and private entities and the actions the organizations took will keep families and the community together.

“When they have a crisis, we shouldn’t have to separate families from each other and send them somewhere else to get help,” she said. “That’s what today is about, keeping families together, and that’s what we’re going to continue to do.”

The unit will be in a 14,000-square-foot building on 1.77 acres behind the Care Campus on Quincy Street. It will include the existing eight-bed Crisis Care Unit and a new 16-bed Stabilization Unit and serve as an evaluation site for those who may need to be involuntarily committed to treatment.

Barry Tice, the county's Health and Human Services director, said the $6.2 million facility could have a substantial impact on the people who already use the Crisis Care Center.

Tice said the Crisis Care Center sees between 1,500 and 2,000 people a year. He said there are upwards of 1,500 people entering the emergency department for behavioral health needs.

“We hope to reduce that eventually by at least 50% and upwards,” he said.

The bulk of funding for the unit comes from the state following a $4.6 million bill signed in the last legislative session for design and construction costs of the facility. As building material prices increased over the summer, the cost of construction for the facility did as well.

Tice, Sheriff Kevin Thom and John T. Vucurevich CEO Alan Solano approached the city and county for additional funds, as well as other private organizations, to bridge the gap.

Linda Reidt Kilber, CEO of Behavior Management Systems, said the facility will be the entry point for all adults from the area and surrounding communities.

She said a plan will be developed and coordinated for discharge planning to link the adults to quality providers and resources in their communities and to be successful with recovery.

“This facility will provide a continuum of care for adults to meet the needs of their mental health services by keeping them in their communities,” she said.

Thom said the project has been in development for at least 10 years, and people talked about having more services for behavioral health in South Dakota for a longer period of time.

He said the same partnerships that make up the Care Campus will make up the Crisis Stabilization Unit as well, which includes Behavior Management Systems, the Rapid City Police Department, Health and Human Services, and the Sheriff’s Office.

Allender said the facility doesn’t have anything to do with traditional government and traditional business as people know it. He said it’s part of the human service that the government is obligated to perform.

“Human services are like a thousand piece puzzle,” he said. “This is one piece of the puzzle and it’s a very important piece.”

Allender said everyone in the community may not agree that this is the right piece of puzzle, but it’s an important need to provide for people who suffer from conditions not everyone does.

Gov. Kristi Noem, who was scheduled to speak at the groundbreaking, was unable to attend due to weather.