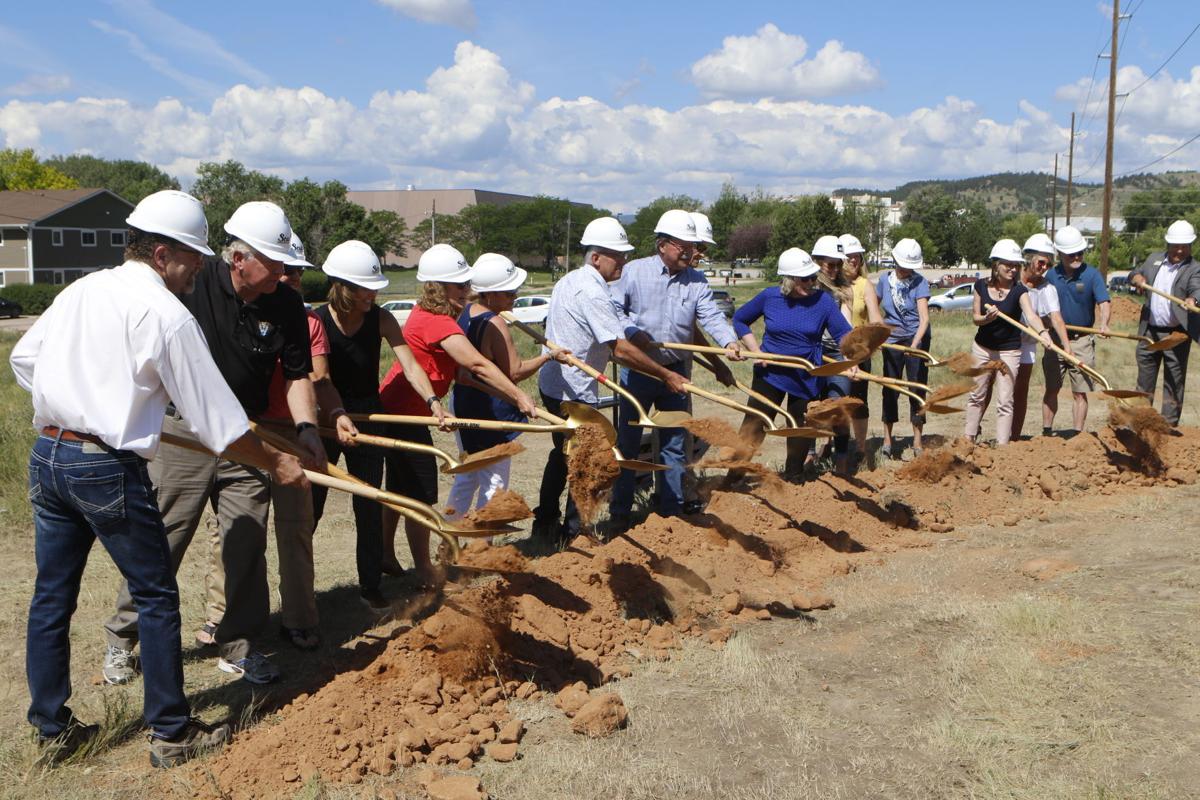 The new facility will be located at the corner of First and Denver streets in Rapid City on land donated to Passages by the city. Executive Director Marge Beam said Passages Place will serve formerly incarcerated and homeless women as they transition into living fulfilling and independent lives.

Passages staff and board members, city staff, representatives from the Vucurevich Foundation and other local businesses and sponsors gathered to celebrate the groundbreaking, marking a new chapter for the organization and a revitalization effort for the neighborhood.

Rapid City Mayor Steve Allender said the land once housed a mobile home park in one of the roughest parts of town, an area in which law enforcement and emergency services were often present.

“I think that is an awesome transition. To go from one of the worst places in town to perhaps one of the best," Allender said Thursday. "That’s what transition is about. I think that’s a symbol of what we want for these women coming out of our prison system."

The home will feature offices, a classroom, meeting rooms and bedrooms. Beam said the new facility will double the capacity of the Passages program. Women will be placed two to a bedroom with a wall between the beds and a shared bathroom, she said.

Passages program graduate Katie Root thinks that the additional space and privacy that Passages Place provides will be an asset to the program.

“This facility is very necessary because I was in the house when it was totally full, and I mean we could  hold hands when we sleep because the beds are so close,” Root said. “This is just going to be helpful to them to have their own space.”

Root credits her current sobriety to the support of the Passages Program. She said she was battling a meth addiction when her mother encouraged her to apply for the program.

In her time with Passages, Root said she gained support and learned skills to help her live independently and with integrity. Before the Passages program, Root said she focused on repercussions and the shame of her addiction.

“I was still living a life that was not true to who I was. I was doing everything to make everyone else happy and living in shame of the destruction of my addiction, so I was basing all my decisions and building my life upon what those around me, what would make them happy, because I just brought sadness to their lives for so long,” she said.

The Passages program helped her build a sure foundation with a support network focused on who she was becoming rather than her past actions, Root said. She now serves as a coach for the Passages Program to help other women overcome similar struggles.

Root said her perspective as a graduate of the program allows her to form a deep connection with those who enter the Passages home.

“There’s something about the peer support aspect of it where you can connect with them on a level because you’ve walked through it,” she said. “They say you can’t keep what you have without giving it away, and that is our greatest commission, is to pass on the things we learn so that we can rise up."

Beam said the transition program has seen an increase in patrons, to the point that Passages has been full for the last two months. The program has a waiting list. Beam said she receives calls almost every week asking about availability.

“We have a wait list of women waiting to get out of prison and some of those are a few months out and I can’t guarantee that we’ll have a bed for them when they get out, so having twice as many beds really helps with that,” she said.

Women complete homework for the program, find jobs and some complete outpatient treatment during their stay at the house.

During the first 30 days of the program, Beam said women have limited responsibilities so they can get used to the lifestyle of the home. After this time period, they are continuously evaluated to ensure that they don’t get overwhelmed with the workload.

Even after the program, many women face challenges trying to re-enter society, Beam said.

“Their biggest barrier after they finish Passages is getting low income housing with a felony [on their records],” she said. “They still really struggle with that, so we’re trying to work with the public and state representatives to see if we can find a solution."

Allender said those in the criminal justice system often struggle with significant struggles and setbacks throughout their lives. The mayor said it is unfortunate those issues don’t necessarily stop when their prison sentence ends.

“If they didn’t have enough problems before, now they’re out of prison, they’ve perhaps let their identification expire, they don’t have job prospects, no one wants to hire an ex-con, there’s a stigma of being in prison,” Allender said.

One way Passages seeks to combat the stereotypes surrounding ex-convicts is through community support, Passages Board President Don Van Etten said. Many businesses and organizations within the community are willing to hire Passages graduates and assist them in transforming their lives, he said.

“The community has been very responsive, and in spite of the fact that these are ex-convicts that we’re asking them to hire, there are a lot of people who will hire them,” Van Etten said.

Dirt and foundation work for the new facility are scheduled to begin immediately, with construction expected to be completed in six to eight months, Beam said.

At Thursday's ceremony, Beam expressed gratitude for the support of the community.

“Passages Place will be a new beginning for many daughters, sisters, mothers, grandmothers, and friends for generations,” she said. “Let us recommit ourselves to this great project that will serve this community for years to come.”