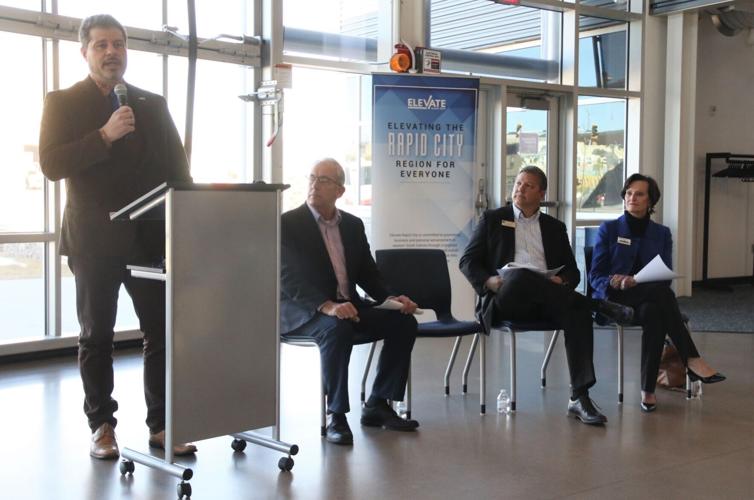 Local officials acknowledged Monday that the lack of affordable housing has accelerated in Rapid City and the Black Hills while promising to do what they can to address the problem.

“We are aware there’s a housing crisis, fully aware,” Mayor Steve Allender said at a press conference. “Much of the talk early on had to do with the B-21, the arrival of the B-21 airmen, construction and all of the related business over at Ellsworth Air Force Base, but the growth is outpacing our ability to create housing without the B-21.”

Johnson said about 2,500 people move to Rapid City and the region in an average year. With the upcoming B-21 bomber expansion at Ellsworth Air Force Base, the area could grow by 7,000 people a year, he said, adding that Elevate Rapid City anticipates between 25,000 and 40,000 new residents moving here in the next few years.

Johnson said the area currently has a need for as many as 6,000 more housing units.

A 2017 housing study commissioned by the Vucurevich Foundation found the city was behind by about by 3,500 housing units. It also found that 4,500 households in the city area were paying more than 50% of their income for housing.

“This is hard to accept for someone just making it, and Rapid City, South Dakota, is held up in large part by workers and families who are in the service industry, agriculture, tourism and not many of these folks are living a luxurious lifestyle,” he said. “These market rents are a little bit dicey.”

He said with vacancies being at historic lows of 2% and scarce housing availability, there’s no incentive for landlords and apartment complexes to reduce rent.

The mayor said much of Rapid Valley east of Rapid City is facing large developments of several hundred homes, which present “real life issues” that need to be addressed.

“Pennington County officials and city officials have been discussing this behind the scenes for a little while and talks are getting very serious now,” Allender said. “Not only to the east but anywhere in Rapid City, if the justification exists, annexation could be one of the discussion topics that we face.”

Allender said Tax Increment Finance Districts, a financing tool that Rapid City has used in the past, are a tool that could be used for housing developments.

Johnson said that Elevate Rapid City has received requests from the school district, health care organizations and other businesses that want help finding housing for employees that has led to hiring a housing coordinator with collaboration from the Black Hills Area Community Foundation. Johnson said they hired Laura Jones, who will work with the development community and city on housing projects.

Solano said his foundation, the Black Hills Area Community Foundation, Elevate Rapid City and the city will fund another housing study that is anticipated to be released by the fall. He said the 2017 study cost about $70,000, but does not have final numbers on how much the 2022 study is expected to cost.

“In that time since 2017, we’ve seen dramatic changes,” Solano said. “I think maybe the challenging part will be understanding the impact of the B-21, what that’s going to do to us. The immigration just during the pandemic has been so significant, to try to really understand that. Those are two dynamics that really were not in play during the 2017 study.”

There are three organizations that will be interviewed to do the study, which will look at housing, demographic and population changes, and income. He said it will also help find the gaps that exist in the community and be a resource when applying for state funds and to developers.

City Communications Coordinator Darrell Shoemaker said there have been numerous inquiries from developers looking to build more housing in the area.

CommonBond, a Minnesota-based affordable housing non-profit organization, is the first company to work with the Black Hills Area Community Foundation. The company was granted funds from the Strategic Housing Trust Fund, which was developed in response to the housing crisis based on the 2017 study.

CommonBond will receive a $550,000 loan for a 42-unit development on LaCrosse Street. It is also working with the South Dakota Housing Development Authority for Community Development Block Grant funds from the city.

Hamburg with the Community Foundation said the fund has about $11 million for revolving loans. She said $5 million came from the city’s Vision Funds, a $5 million match from the Vucurevich Foundation, $1 million from the Dakota Charitable Foundation, and contributions from individuals.

Hamburg said each project will be different and have a different payback timeline. Those interested are able to apply for funds. Those selected will be interviewed and could be reviewed by the fund advisory board, which includes city planning staff, business people and other developers. If approved by the board, the Community Foundation board of directors considers the application and makes the final call.

She said there is a preference for multi-family housing.

“Just because the problem is so great that we can take a bigger bite out of it the more we can do in one location,” she said.

Allender and Johnson said solving the housing crisis is not just the responsibility of philanthropies, public and private entities. Johnson said the community can help as well by reaching out to lawmakers on legislation that could impact housing and to think about housing as a region rather than paying attention to political boundaries.

“I think everybody recognizes that if we get this wrong, things could go bad and we could have growth that’s not anticipated, planned for, and maybe even ugly,” Johnson said. “But if we get this right, we can plan for it. We can have good jobs for those that want them, we can bring kids back that want to come here, and we can keep the kind of amenities and cultural things that make this a place that folks want to come to and stay.”